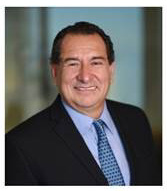 Mr. Garcia is a veteran investment banker and a nationally recognized expert in tax-exempt and taxable multifamily housing and bond financing. He has completed over $6 billion dollars in apartment financings and has been responsible for developing several innovative private credit enhancement programs for multifamily new construction and rehabilitation projects. Prior to joining Hutchinson, Shockey, Erley & Co as a Senior Vice President in 1996, Mr. Garcia was both a principal in his own firm, Bancroft, Garcia & Lavell, from 1986 to 1993 and subsequently a Director in public finance for Merrill Lynch from 1993 to 1996.

Mr. Garcia is a member of the State Bar of Arizona. He holds a graduate degree from Arizona State University, College of Law (1982) and a Bachelor’s degree in Sociology (1979) from the same University. Additionally he is a founding member of the “Hispanic Business” Scholarship Fund.